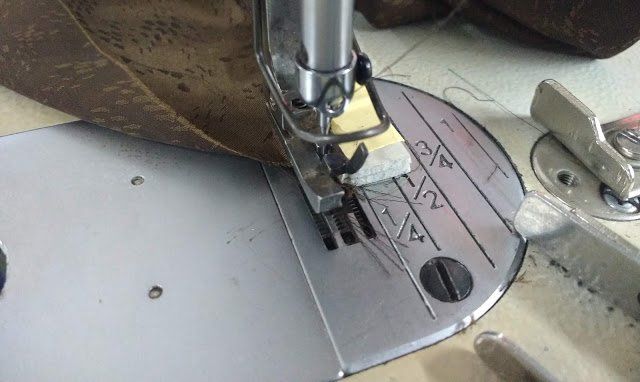 n textiles, a stitch is a series of repetitive single turn or loop of threads or yarns through interloping, intralooping, or interlacing. It is the fundamental element for sewing, knitting, embroidery, crochet, and needle lace-making whether by hand or machine. It can be formed by any of the following three methods:

Based on this, there are more than 70 types of stitches out of which around 18-20 types are used most frequently and for ease of identification all the types have been grouped to 6 classes based on the number of the needle, direction of sewing, the form or shape of the stitch, purpose of the stitch, etc. The 6 classes of stitch are mentioned as:

The stitches formed here are from one or more needle by the method of intralooping. Thus, one or more loops of the needle thread are passed through the fabric and secured by looping with the next loop of the same thread after they are passed through the fabric. This type of stitch is very insecure as each loop is dependent on the next loop and a single thread breakage can pull apart the entire stitch.
These look similar to that of lockstitch on the face side with the loops on the back. The added advantage of these loops is that it makes the stitch elastic and thus can be used where the fabric needs a little stretch such as in back neck tape in t-shirts. Also, with easy removal of stitch, it is used in basting operations in tailor-made garments. This kind of stitch is often not preferred for seaming operations but is widely used in multi-needle machines, as temporary stitch and blind stitch.
Stitch type 101 or single needle chain stitch is the most common of them along with a 103 single thread blind stitch. The front and back of all the other types are given below

These types of stitches are hand stitches that are used for decorative purposes. These are formed by a single sewing thread and the stitch is held by a single line of thread passing from one side to the other side of the fabric. This is mostly used for casual fitting with a simple sewing needle and thread as domestic needs but is also found as topstitch in high-priced garment due to its perfect finish. This can also be done on automatic machines called pick stitch sewing machines but are very slow and are rarely in use.

Lock stitch is the most common form of stitch in ready-made garments and is formed when the thread or threads are introduced from one side of the material to interlace with thread or threads introduced from the other side of the material. The top thread is called the needle thread and the bottom thread is called the bobbin thread. The interlacing of the threads makes the stitch secure and difficult to unravel makes it the most appropriate for a wide range of seams. Also, lockstitch has adequate strength for most purposes with a correct combination of thread and fabric.
The main disadvantages of lock stitch are
Stitch type 301 is the most common type of stitch with uses in joining garment components, topstitching, etc. Also, buttonholing, button attaching, blind stitching falls in this class of stitches. The front and back of all the other types are given below.

It is a multi-thread chain stitch type where loops formed in one set of sewing thread is passed through the fabric and are held by interloping and interlacing with loops formed by another set of threads called the looper threads. It looks like that of a lockstitch on the front side of the fabric but has a double chain effect created by the looper thread on the backside. Compares to lockstitch, a 2-thread chain stitch is much stronger and since no threads are interlocking with each other within the fabric there are lesser chances of having a puckering in the seam. Another advantage of this is that both the needle and looper thread runs from large cones on the top of the machine unlike that of the limited sewing thread inside bobbin. Also, it runs much faster than that of a lockstitch machine at 8000rpm.
Stitch type 401 is the most common of them all and is used in sewing jeans and trousers and is also used with overlock as a safety stitch. Stitch type 406,407 are used for joining lace, braid, elastics with the garment. The front and back of all the other types are given below.

It is mostly known as overlock stitch and is formed by one or more sets of sewing threads with at least one set of thread going around the raw fabric edge. All the stitch in this class has high elasticity which does not unravel on thread breakage. Also, the machines are equipped with a trimming knife to make the edge neat before sewing. The width of the stitch may vary from 3-5mm. Overlock stitches are classified according to the number of threads used for sewing such as 1,2,3,4 or 5 thread stitches. Each of these stitches is different in appearance and their respective benefits are:
Also, the speed of the overlock machine is similar to that of chain stitch machines and can go up to 8000rpm. Stitch Class 504(3 thread overlock) is the most common of all and is used for securing the raw edges of the fabric and for heavy fabric such as denim 514 (4-thread mock safety) is used. This is because 3-thread stitches are prone to seam grinning when the seam is pulled at a right angle to the seam. The front and back of all the other types are given below.

It is mostly known as Flatlock stitch and is formed by three sets of sewing thread namely, needle, looper, and spreader. Apart from the needle threads, the other two sets cover the top and bottom part of the stitch. It is the most complicated of all types with up to a total of nine threads including four needles and rest looper and spreader thread.
These are mostly used for attaching tape, lace, braid, elastic to the knit fabric, etc. It can also be used as a decorative stitch. Stitch type 602 is mostly used for the above functions and hemming in t-shirts. The front and back of the rest are given below.

Stitch classification may not be of so much importance when it comes to knowledge but a clear understanding of it is very much important when there is a requirement of identification of stitching to be done in the garment especially in the tech pack. The stitch type then acts as a code at letting the reader know what stitch has to be done over that part of the garment.
Login with Google